A champion and a hero 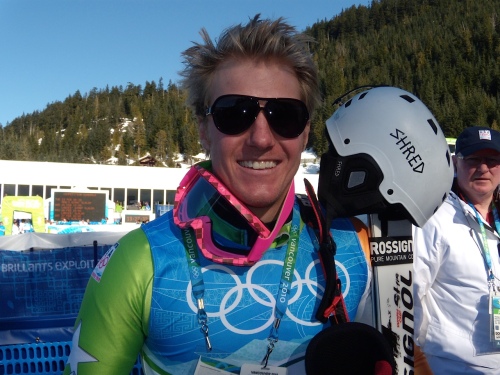 Ted Ligety skied into the history books today. After winning the giant slalom at the 2013 World Alpine Championships in Schladming, Austria, he became the first man in 45 years to win three gold medals at one world championship. Earlier this week, he won the super G and super combined races — events that he has never won on the World Cup circuit.

Ligety now owns 5 world championship medals (bronze in GS in 2009 and gold in GS in 2011) — a record he shares with U.S. teammates Julia Mancuso, Lindsey Vonn, and Bode Miller. He’s also the owner of one Olympic gold medal from 2006 in the “old style” combined (where skiers ran one downhill and two runs of slalom, not one run of each like they do in the new super combined).

And the list goes on for Ligety. He is the first U.S. skier of either gender to win the GS medal twice at the world championships and the first to win three golds in one worlds.

“It’s been pretty surreal,” said Ligety after the GS today. “I knew I had good chances to medal in those other two events, but I didn’t think the chances were gold medal chances. It’s been by far my best week of ski racing in my life.”

But Ligety is much more than a champion on the racecourse. He’s the kind of guy you want your kids to grow up to be — and not just because he skis fast. He knows his role as a ski racer extends beyond the gates, and he’s respectful, thankful, gracious, well spoken, funny, smart, savvy, polite, and giving, and not necessarily in that order. Some examples that I’ve observed over the years:

Thanks, Mom &amp; Dad! When he first made the U.S. Ski Team and began racing on the World Cup in November 2003, he taped a piece of paper that read “Mom &amp; Dad” to the front of his helmet — real estate normally taken by an alpine skier’s primary sponsor (like Putnam Investments now). See the Jonathan Selkowitz photo from a December 2005 issue of Ski Racing (below). 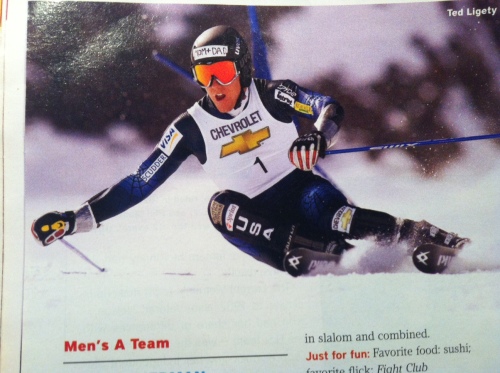 It was a funny and heart-felt tribute to his parents who, like most parents in a ski racer’s formative years (which can last an indeterminate number of years), no doubt bought countless pairs of skis, bindings, boots, poles, goggles, helmets, shin and chin guards, speedsuits, warm jackets, warm-up pants (that are frequently lost), gloves and mittens (also frequently lost), long underwear, ski passes, lift tickets, and paid race fees. Like other ski-racing parents, they probably got up hours before dawn to make a lunch, then drove their young ski racer across a state or two to reach a race. They no doubt helped tune skis as well, carried coats down from the start, stood beside the course in rain, sleet, hail, snow, freezing cold snaps, and sometimes sun, and perhaps prayed (well, at least mom might have) that their little ski racer first and foremost would not get injured, and secondly, would have a good run. They hugged their ski racer with both smiles and tears. And then, while their exhausted ski racer slept, they drove home that night. While many ski racers take parental “butlering” for granted, Ligety did not.

Gracious and respectful, even in defeat. At the Vancouver 2010 Winter Olympic Games, Ligety was the defending gold medalist in combined (by then, the super combined) and a heavy favorite in GS, where he had already won World Cup races. But the Games didn’t go as planned. He finished fifth in super combined and ninth in GS. Others who had disappointing Olympics blew through the mixed zone (where athletes talk to the media) as if they were late for a train. Wearing a special green speedsuit that Spyder had created for Ligety as the defending gold medalist, he stood for hours in the mixed zone talking to the media — about his own mistakes and his teammate’s success. Of Andrew Weibrecht’s surprise Olympic bronze medal in super G in 2010 (while Ligety finished 19th), he said: “[Andrew’s] been so fast for so long, and his technique is rock solid. It’s actually been more of a surprise that he hasn’t been better earlier. I feel like today just shows what he’s capable of. He’s always had the potential to be this fast.”

Ligety has acted with similar respect when asked for out-of-competition interviews, replying quickly and returning calls at the appointed time.

Savvy businessman. While many athletes wait until after they have retired from their sport to start a business venture, Ligety began Shred just as his ski career was taking off. He wanted to look different on the racecourse — to stand out, he told Dave Peszek, former Uvex rep. And he thought retro 80s hot pink and neon green would do the trick. “I thought it was funny and something different,” said Ligety. When his contract with Uvex ran out in 2006, Ligety and friend Carlo Salmini (who owns Slytech, maker of protective body armor for skiers and snowboarders) started making neon-colored goggles. The name of the company? Ligety’s nickname, Shred — “because it rhymes with Ted, I get after it on skis, and I was fearless as a little kid,” he said. Shred also sells helmets with humorous names like “Toupee” and “Brain Bucket,” and they come in colors like Nastify Green and Crooked Blue.

He’s funny. About that green Spyder suit at the 2010 Olympics, Ligety said, “I think they looked on the Shred website and picked out the most prevalent colors. They missed the Nastify Green tone a little bit, but it’s close.” (See photo below.) Then he added: “It’s a little too Slovenian for my taste. But it’s cool. It’s neat to have something a little bit different.” 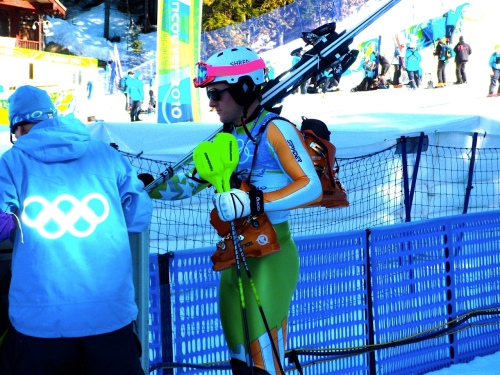 Stands up for his and other skiers’ rights. When the FIS changed ski specs for giant slalom skis this season — making the skis straighter, with less sidecut “to enhance athlete safety and reduce risk of injury,” stated the federation — Ligety was one of the most outspoken athletes against the change, not because he feared the new ski design would impact his World Cup results. He thought that “the FIS should remove itself from equipment issues” and that the new rule would “turn back the clock on the evolution of this sport,” he wrote in his blog on tedligety.com. He also feared the impact the rule change would have on young ski racers, who don’t have the strength to muscle straighter skis into turns and who have learned to carve turns on the more shaped skis. When the FIS wouldn’t budge on its decision, Ligety set about learning how to ski the straighter GS sticks and has all but dominated GS this season. So there!

Never too busy or too tired for his U.S. fans. By the time the U.S. Alpine Championships roll around in late March, most of the U.S.’s top skiers are done for the season — both mentally and physically. And the championships are often held at far-flung ski resorts that are hours from the nearest airport (Whiteface Mountain near Lake Placid, N.Y., a couple hours north of Albany; Mammoth, Calif., three hours south of Reno; Alyeska, Alaska, an hour east of Anchorage). But not Ligety. No matter how tired he’s been, he’s competed in nationals every year but one for the past decade, winning three titles in the process.

He values his friends and gives back. In 2010, immediately after nationals, Ligety traveled to Cochran’s Ski Area in Richmond, Vt., for the Thank God For Snowmaking Slalom. It was a fundraiser for the little ski area started by Mickey Cochran in 1962 for his four ski-racing children (all Olympians). The ski area has since become a non-profit community treasure, offering after-school and weekend ski programs for local kids. Ligety not only raced the 30-second flat slalom — with a fun pro jump built by his friend and USST teammate Jimmy Cochran — he also helped shovel snow the night before onto the T-bar track. Then after the race, Ligety spent hours signing autographs for the hundreds of kids who skipped school that day to meet their USST heroes. “It’s wholesome racing, that’s what’s so sweet about it,” said Ligety, after he signed autographs. “It’s fun to be out here with a bunch of people who are super into racing.” Bob Cochran, who competed in the 1972 Olympics and won the famed Hahnenkamm combined title, among other accolades, was impressed by Ligety’s performance, and not just in the gates. “Ted being here, going to nationals, it was hard conditions there, he’s had a long year,” said Cochran. “So he’s my new hero.”

A role model. As Edie Thys Morgan, who competed in two Olympics (1988 and 1992) and three World Championships (1987, 1989, and 1991) and is now the mother of two sons, wrote in her RacerEx blog, “In Ted We Trust:” “Hero worship is way overrated. But I make an exception with Ted Ligety. When you have the world’s best skier (today, and on many other days) who also runs a successful business, makes fun a priority, takes a stand on issues for the benefit of fellow athletes, literally shrugs off disappointing runs and takes time to fist-bump his pint-sized fans on the way up to the podium — when you find all that in one person, I’m good with having my kids worship at his altar.”