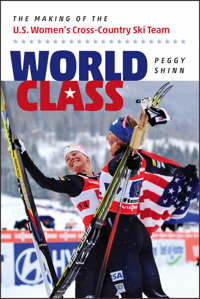 What makes a great team?

Peggy Shinn answers this question in her enthralling account of the dramatic rise of the U.S. women’s cross-country ski team, winners of eight medals at three world championships over the past five years.

Shinn’s story—based on dozens of interviews with athletes, coaches, parents, spouses, and friends—paints a vivid picture of the obstacles that America’s female athletes must overcome not just to ski with the world’s best, but to beat them.

In a sport where U.S. women have toiled for decades, mostly in the middle or the back of the pack, the development of a world-class team attests to the heady combination of a transformational leader, a coach who connects with his athletes, the super-fast individual skiers who are also conscientious teammates—and a bit of good luck.

“A well-deserved tribute to an amazing team. Belief and perseverance coupled with an ‘athlete’s coach’ and teamwork are the key ingredients that make the magic happen.” — Bill Koch, 1976 Olympic silver medalist and 1982 overall World Cup champion in cross-country skiing

“With remarkable insight into how the women of the U.S. Ski Team have become one of the most powerful teams in the world, Shinn’s writing is filled with intimate glimpses of all the key players. A compelling read.” — Peter Graves, former racer and ten-time Olympic Games announcer

“Teamwork, resilience, creativity: these are some of the virtues that powered the U.S. women’s cross-country team to a breakthrough in a sport long dominated by other nations. Shinn’s reporting legwork and storytelling instincts immortalize the tale of these tough and innovative athletes.” — Nathaniel Vinton, author The Fall Line: America’s Rise to Ski Racing’s Summit

“An inspiring example of the strength of collective human will, positive thinking, and teamwork. For everyone, a lesson in positivity, perseverance, and being creative in turning a tide roiling against you.” — Chad Salmela, former U.S. biathlon team member, college coach, and NBC commentator

Published by the University Press of New England, World Class was released in January 2018, prior to the 2018 PyeongChang Olympic Winter Games. Find it at an independent bookseller near you. 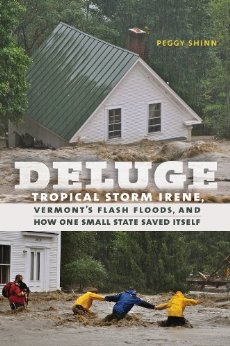 On August 28, 2011, after pounding the Caribbean and the U.S. Eastern seaboard for more than a week, Hurricane Irene finally made landfall in New Jersey. As the storm headed into New England, it was quickly downgraded to a tropical storm. And by Sunday afternoon, national news outlets were giving postmortems on the damage. Except for some flooding in low-lying areas, New York City—Irene’s biggest target—had escaped its worst-case scenario. Story over.

But the story wasn’t over. As Irene’s eye drifted north, its bands of heavy rains twisted westward over Vermont’s Green Mountains. The mountains forced these bands upward, wringing the rain out of them like water from a sponge. Streams and rivers were transformed into torrents of brown water and debris, gouging mountainsides, reshaping valleys, washing out roads, pulling apart bridges, and carrying away homes, livestock, and automobiles. For weeks, mountain towns were isolated, with no way in or out, and thousands of people were left homeless. In the immediate aftermath of the disaster, it fell on the shoulders of ordinary Vermonters to help victims and rebuild the state.

Deluge, Tropical Storm Irene, Vermont’s Flash Floods, and How One Small State Saved Itself, is the complete story of the floods, the rescue, and the recovery, as seen through the eyes of the people who lived through them: Wilmington’s Lisa Sullivan, whose bookstore was flooded, and town clerk Susie Haughwout, who saved the town records; Tracy Payne, who lost her home in Jamaica—everything in it, and the land on which it sat; Geo Honigford in South Royalton, who lost his crops, but put his own mess on hold to help others in the town; the men who put U.S. Route 4 back together at breakneck speed; and the entire village of Pittsfield, completely isolated after the storm, and its inspirational story of real community.

“[Shinn] captures with you-are-there clarity the spectacular horror of the flashfloods that uprooted buildings and carried away cars, and then, in the weeks that followed, the inspiring ways that Vermonters banded together, took care of one another, and rebuilt the state. It’s absolutely riveting.” — Chris Bohjalian, Burlington Free Press

“Written by Rutlander Peggy Shinn, this is not just ‘another flood book.’ It is a riveting account that reads like a ‘who-dun-it’ even though we supposedly know what happened.” — Karen D. Lorentz, The Mountain Times

” … Shinn — a writer for the U.S. Olympic Committee’s website, TeamUSA.org — moves from a scientific summary of the torrent to the page-turning prose of a thriller.” — Kevin O’Connor, Rutland Herald

“In Deluge I learned about the challenges faced by Vermonters across the state. I learned about what needed to be done to resurrect Vermont’s decimated infrastructure. I felt the deep grief as people described losing their homes and businesses, and my heart soared with pride when reading about what ordinary people did to save others and themselves. I want others to know what happened, but I recognize that doing so means unearthing difficult days for the world to see. I applaud all those who were interviewed for their courage and vulnerability and Shinn for telling the tale. But, more than anything, I look forward to a time when this is history.” — Jennie Marx, The Arts Fuse, Boston’s online arts magazine

Published by the University Press of New England, Deluge was released on August 28, 2013. Find it at an independent bookseller near you.